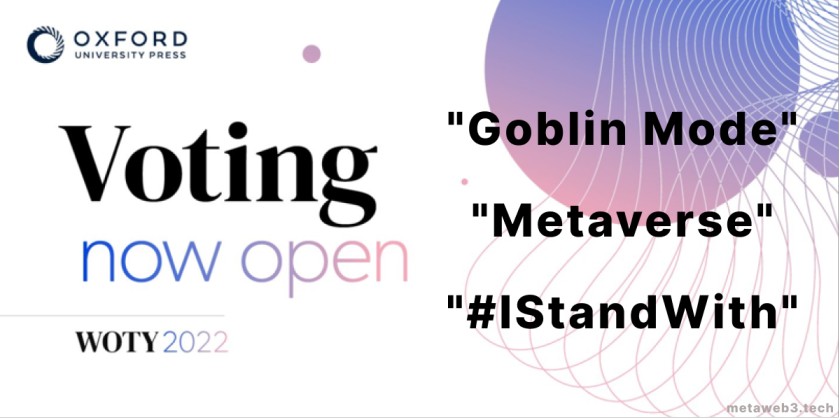 Oxford University has opened voting for WOTY 2022 to the public for the first time, with polls closing on December 2.

The term “metaverse” is one of three contenders for the title of “Oxford ” Word of the Year” (WOTY) in a competition held by Oxford University Press (OUP), the publisher of the Oxford English Dictionary.

On November 22, OUP formally announced the commencement of the competition and its three finalist words for 2022, with this year marking the first time the public can vote for the WOTY.

“Metaverse” will compete with “#IStandWith” and “Goblin Mode.”

For the first time in its history, we're opening up Oxford Word of the Year to you.

Are you ready to choose the word you feel reflects 2022 best?

Take a look at the #OxfordWOTY finalists and vote below ⤵️

The Metaverse was characterized in OUP’s video presentation as “a fictional virtual reality world in which users interact with one another’s avatars and their surroundings in an immersive way.”

“The word extends back to the 1990s, with the earliest known use in the Oxford English Dictionary in 1992 in Neil Stephenson’s science fiction novel Snow Crash,” according to the video.

According to Oxford, the term “Metaverse” has doubled in usage in October 2022 compared to October 2021. According to the video, increased lifestyle and work-related activities in virtual reality environments may lead to “greater disputes about the ethics and feasibility of a totally online future.”

In terms of the other two WOTY candidates, “#IStandWith” has become a popular political activist hashtag, while “Goblin Mode” evolved as a post-COVID-19 lockdown notion in which one refuses to “return back to normal” and instead does what they want.

In terms of how the three phrases were picked, OUP indicated that they conducted an analysis on a linguistic data system to restrict the options down to three.

Voters must cast their votes on the Oxford Languages website to formally vote for “Metaverse” or the other two candidates.

Oxford did not specify when the winning word would be revealed.

At the time of writing, a Twitter poll conducted by OUP found that 63% of 929 participants preferred “Goblin Mode,” followed by “Metaverse” at 22% and “#IStandWith” at 15%:

A phrase used to reject returning 'back to normal' as we emerged from worldwide #lockdowns. pic.twitter.com/VKlTJ50hid

Whatever the outcome of the survey, the Metaverse is expected to be a substantial sector in the near future, according to a recent analysis by worldwide consulting firm McKinsey, which estimates Metaverse-related technologies to be worth $5 trillion by 2030.

Citi increased its forecast, predicting that the entire addressable market for the metaverse economy will be in the $8-13 trillion range over the same time period.

The blockchain and cryptocurrency industries, as well as Meta CEO Mark Zuckerberg’s rebranding of Facebook to Meta in October 2021 and its recent developments on its Metaverse products through its Reality Labs business, have all had a significant impact on our understanding of the Metaverse.