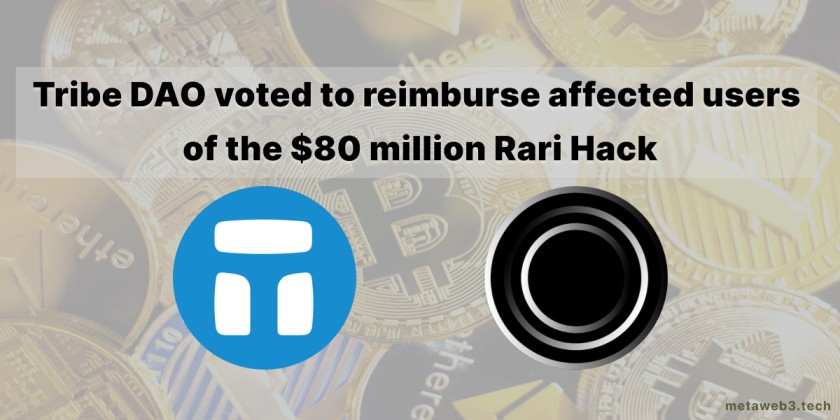 The vote to reimburse customers affected by the theft was one of the final governance choices for Tribe DAO, which has announced intentions to wind down.

After months of uncertainty, the Tribe DAO has voted to reimburse affected users of the $80 million exploit on the liquidity pools of decentralized finance (DeFi) platform Rari Capital.

According to data from the on-chain voting tool Tally, 99% of those who voted were in favor, and the proposal was implemented on September 20.

Individual users will be rewarded in FEI while DAOs will be paid in DAI, according to the description behind the voting data. Users would also be required to sign a message relieving them from any liability.

On Twitter, Fei’s creator, Joey Santoro, stated that the payment would be made 24 hours after the vote.

1/ The Rari Fuse Hack Payment has passed on-chain to FULLY pay the victims in 24 hours.

This is a big moment in these final governance decisions of the Tribe DAO.

The vote was one of the last governance decisions for Tribe DAO, which has announced its intention to wind down.

The “difficult macro climate” and “particular challenges like Rari Capital’s Fuse hack,” they noted in their Aug. 20 proposal, were all considerations in the decision.

“At this point, the DAO should contemplate leaving the protocol in a position that would defend the FEI peg without the requirement for governance.”

The process of reimbursing victims of the hack has been ongoing, with numerous rounds of voting via snapshot signaling polls and on-chain. However, none of these has resulted in a resolution for affected users.

In a Sept. 20 Twitter post, Joey Santoro outlined the difficulties they all had in coming up with a solution in the hopes that other DAOs can learn from the situation.

“The most important takeaway here is that DAOs should not be forced to make decisions like this after the fact.” A stated upfront policy, ideally with on-chain enforcement, would have prevented the DAO from entering a new governance area.

6/
I hope everyone can take away these lessons and know that all of the stakeholders truly did their best in an unprecedented situation.

Following the incident, the hackers were offered a $10 million bounty, although it was never revealed whether they reacted.