Home / News / MiCA and ToFR: The EU moves to regulate the crypto-asset market

MiCA and ToFR: The EU moves to regulate the crypto-asset market 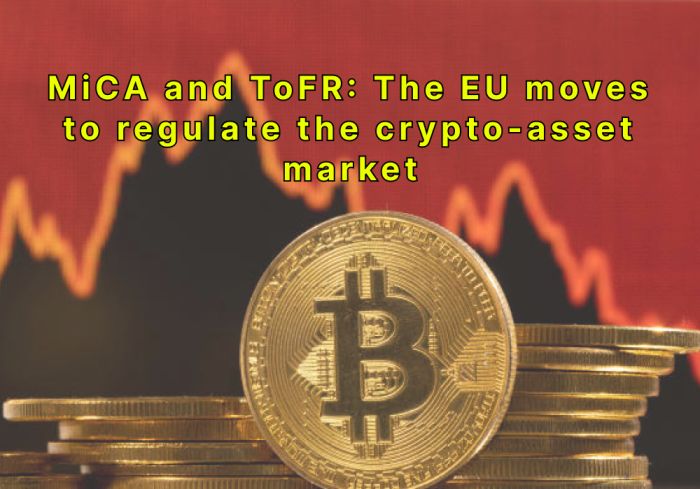 Markets in Crypto-Assets (MiCA), the EU’s major legislative proposal to regulate the business in its 27 member countries, received approval on the last day of June as a result of a deal the EU struck on how to govern the crypto-asset sector. The Transfer of Funds Regulation (ToFR), which imposes compliance criteria on crypto assets to reduce money laundering threats in the industry, was previously passed by legislators in the member states of the European Parliament a day earlier, on June 29.

Given this situation, we will continue to examine these two laws, which, because of their extensive reach, can act as a standard for other Financial Action Task Force (FATF) members outside of the EU’s 27 member states. Going back a few years will help us better comprehend not only the outcomes but also the circumstances that brought us to this point.

Relationship between the FATF and recently passed EU law

An international, intergovernmental group is known as the Financial Action Task Force. The EU and the majority of the major nations are among its members. The FATF is made up of country-appointed representatives rather than being a democratically elected body.

These individuals work to create suggestions (guidelines) for how nations should create anti-money laundering and other financial watchdog policies. Despite the fact that these so-called recommendations are not legally enforceable, there may be costly diplomatic and financial repercussions if a member nation refuses to follow them.

In line with this, the FATF published its first rules on crypto assets in a document that was released in 2015, the same year that nations like Brazil began discussing the first cryptocurrency-related legislation. The initial document from 2015, which replicated the Financial Crimes Enforcement Network’s (FCEN) current policies, was reevaluated in 2019. On October 28, 2021, a new document titled “Updated Guidance for a Risk-Based Approach to Virtual Assets and VASPs” was released, containing the most recent FATF recommendations on virtual assets.

In addition to the well-known concerns like consumer protection, etc., this is one of the reasons why the EU, the U.S., and other FATF members are working hard to regulate the cryptocurrency market.

If we take a look at the 29 of the 98 jurisdictions whose parliaments have already passed legislation on the “travel rule,” for instance, we will see that they have all complied with the FATF’s recommendations to make sure that service providers dealing with crypto assets confirm and disclose the identities of their clients to the financial authorities.

The digital financial package for Europe

One of the legal ideas created for the digital finance package unveiled by the European Commission in 2020 is the MiCA. This digital finance package’s primary goals are to support the financial sector’s competitiveness and innovation in the European Union, position Europe as a global standard-setter, and guarantee consumer protection for contemporary payments and digital banking.

The DLT Pilot Regime and the Markets in Crypto-Assets proposals, in this regard, were the first concrete steps taken within the framework of the European digital finance package. The Transfer of Funds Regulation and the proposals were both approved by the European Commission in September 2020.

These legislative proposals were developed in accordance with the Capital Markets Union, a 2014 initiative that seeks to create a single capital market throughout the EU in an effort to lower obstacles to macroeconomic benefits. It should be remembered that each proposal is merely a draught law that must be approved by all 27 EU member states as well as the EU Council in order to become law.

As a result, on June 29 and June 30, the political negotiating teams of the European Parliament and the Council of the European Union signed two “interim” agreements on ToFR and MiCA, respectively. Such agreements are still in the provisional stage since they must be approved by the Economic and Monetary Affairs Committee of the EU before being voted on in the full assembly.

Consequently, let’s examine the key terms reached by the political negotiating teams of the European Parliament and the European Council for the cryptocurrency market (cryptocurrencies and asset-backed tokens such as stablecoins).

On June 29, the political negotiating teams for the European Parliament and the Council of the European Union came to an agreement on the “travel rules,” or ToFR, for the continent of Europe. These regulations filled a significant gap in the current European legislation against money laundering by outlining explicit standards for crypto asset transfers to be observed between providers like exchanges, unhosted wallets (like Ledger and Trezor), and self-hosted wallets (like MetaMask).

Principals of the Cryptoasset Markets that have been “authorized”

Although it is not the only proposal in the European package for digital finance, MiCA is the main piece of legislation governing the crypto industry in Europe. It establishes regulations that must be adhered to by all 27 of the bloc’s members, making it the first worldwide regulatory framework for the crypto-active industry.

Some people criticized the ToFR shortly after the MiCA and ToFR agreements were announced. They noted, for instance, that while legislators had contributed, the approved origin and recipient identification measures only applied to central bank digital currencies and excluded privacy-focused blockchain networks like Dash and Monero.

Others have made the case for the necessity of an unified and thorough framework, such as the MiCA plan, which gives regulatory clarity and bounds for industry players to be able to operate their enterprises safely across the various EU member countries.

Polkadot ecosystem represented in Paris during EthCC at ParisDot.comm event