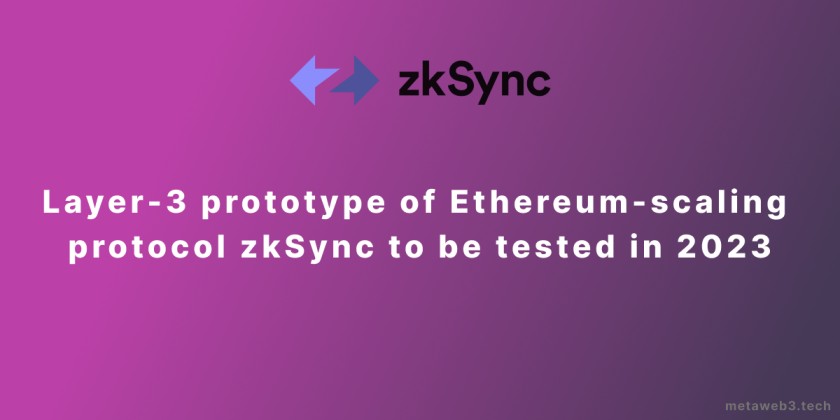 According to Matter Labs’ chief product officer, Steve Newcomb, the unveiling of its L3 prototype will dramatically increase the performance of its L2 solution.

A new layer-3 (L3) prototype targeted at addressing Ethereum’s scalability difficulties will be available for testing as early as Q1 2023.

On October 10, zkSync, a provider of zero-knowledge blockchain solutions, revealed that it plans to launch a new EVM-compatible layer-3 prototype called “Pathfinder” on testnet early next year.

zkSync is an L2 Ethereum scaling mechanism that aims to reduce network utilization expenses. It released a 1.0 version in June 2020 and is now preparing to release zkSync 2.0 later this month.

According to the team’s most recent blog post, the L3 Pathfinder will be a “prototype displaying a ZK rollup as a fractal Hyperchain in Layer 3.” It will make use of recursive scaling.

“It will serve as a framework for public Layer 3 experimentation, research, and development,” the post stated.

With 18 days to zkSync 2.0 on mainnet, we're thrilled to share another exciting milestone on the horizon: zkSync's Layer 3 Pathfinder will be released to the public testnet in Q1 2023.https://t.co/7HnibHn2dX

They claim that while Layer 2 will witness a 10X-100X improvement in performance, “performance in Layer 3 is infinite.”

According to the zkSync team, the goal is to create an L3 “environment of customisable and trustlessly linked blockchains driven by zkEVM that we refer to as ‘HyperChains.'”

The firm claims that its L3 prototype will enable it to greatly improve several aspects of blockchain performance, such as scaling, personalization, and security.

It also contributes to zkSync’s future EVM compliant L2 network (version 2.0), which is set to go live on October 28.

Matter Labs’ Chief Product Officer, Steve Newcomb, stated that the engineering team behind zkSync is aiming for substantial scalability with its L3 solution:

“That’s where the game is going to have L3 and, you know, the reason why people should see us differently than Polygon really is all about by the time they get around to getting that L2 solution, which is much less performant than us,” he added.

Newcomb stated that after the zkSyncs L2 mainnet starts later this month, there would be a month of testing before the introduction of decentralized apps (dApps). The team anticipates that roughly 150 projects will be ready for launch.

In terms of the L3 solution complementing the L2, zkSync has stated that the team intends to “aggressively explore” with it in order to determine its alleged performance-enhancing potential.

The project is focusing on five important areas: performance, cost, ease of use, and composability. “Developers will be able to select among three data availability choices for their project, all of which will use the same proving infrastructure.” “Developers can choose their own trade-offs between pricing, performance, and security,” according to the post.