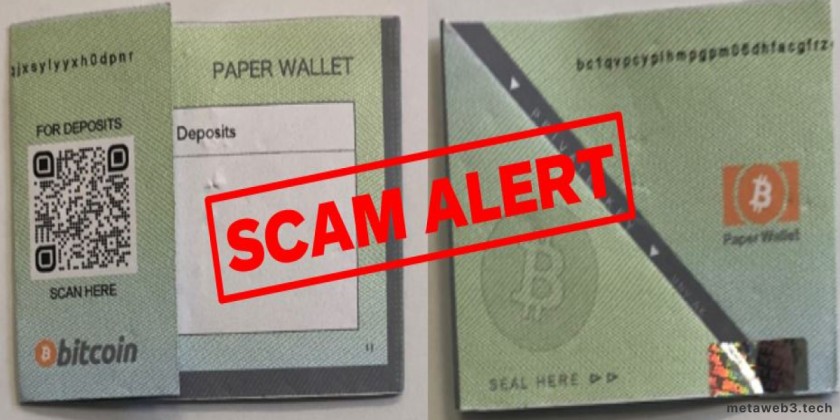 Fraudsters are allegedly leaving fake crypto paper notes in public areas as part of a plan to defraud Australians of their cryptocurrency.

Australians have been urged to avoid suspicious-looking phoney Bitcoin paper notes, which lure victims into accessing a lucrative crypto wallet but eventually drain them of their own crypto holdings.

According to a Nov. 22 post on the NSW Police Force’s Facebook page, the fraud begins with a paper cryptocurrency wallet with a QR code that is designed to look like a true Bitcoin paper wallet.

Scammers leave these in public places such as streets or parks.

When a person finds the paper wallet and scans the QR code, they are sent to a link where they can access a crypto wallet with up to $16,000 Australian dollars ($10,000).

The individual is then requested to pay a withdrawal fee and submit their own wallet credentials, ostensibly allowing them to transfer the sum into their own crypto wallet.

The authorities have warned the public to be cautious, saying that anyone who comes across a paper crypto wallet similar to this should not attempt to scan the QR code, access the account, or provide any personal information.

Instead, they should hand over the wallet to the nearest police station.

Hundreds of additional people from across the country shared their own stories of finding paper crypto wallets in the street, on the beach, and in parks.

One user, Pinnymc, stated that they almost fell for it because they could see the wallet address and the on-chain transactions. They also stated that the website appeared to be authentic.

However, Pinnymc claims that the 0.5% transaction fee made them suspicious.

“If this was a legitimate wallet, I should be able to withdraw and the transaction cost should be deducted from my amount. It’s a shame because this appears to be genuine “said the user

According to data from the Australian consumer watchdog’s Scamwatch website, Australians have already proven to be particularly vulnerable to investment and cryptocurrency-related frauds this year, losing 242.5 million Australian dollars to scammers so far in 2022.

The country’s federal law enforcement agency has likewise identified cryptocurrency criminal use as a “growing threat,” but admits it is difficult to keep up with criminals who are continuously changing tactics and approaches.

WOTY 2022: 'Metaverse’ among top 3 contender for Oxford’s Word of the Year